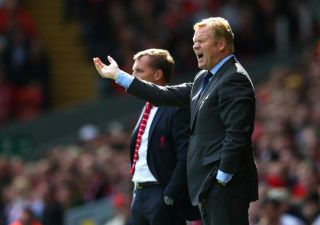 The south-coast club were consigned to a 2-1 defeat at Anfield last Sunday in Koeman's first Premier League game at the helm.

The result was harsh on Southampton, who had the better of the second half but were consigned to defeat after Daniel Sturridge popped up with a winner 11 minutes from time.

An exodus of key players and the departure of coach Mauricio Pochettino to Tottenham raised concerns that Koeman's charges would struggle in the 2014-15 campaign, but their display last weekend suggested otherwise.

The Dutchman was encouraged by the manner in which his new-look side took the game to Liverpool, but knows they face a different challenge against West Brom as they will be expected to start with a win in front of their supporters.

He said: "We played on a good level [against Liverpool], we played an amazing second half.

"The result was not what we deserved, but I think it was good for the confidence, because I believe everybody was a little bit afraid of how Southampton was going to start the season against a good team as Liverpool is.

"But we showed our qualities and showed we are a team who can be very competitive to everybody.

"We know for this Saturday it will be different, maybe more difficult because everybody expects the same level and we play at home.

Centre-back Florin Gardos must wait to make his Southampton debut due to a hamstring injury and striker Jay Rodriguez (knee) is a long-term absentee.

Koeman must decide whether to hand a first start to big-money signing Shane Long, who is poised to make his home debut against one of his former clubs.

Goals from Rickie Lambert and Adam Lallana ensured Southampton beat West Brom 1-0 twice last season, but both players are no longer at the club after moving to Liverpool.

The visitors are also embarking on a new era under head coach Alan Irvine and they looked set to making a winning start under the Scotsman until Sebastian Larsson struck five minutes from time to salvage a 2-2 draw for Sunderland.

Saido Berahino scored twice in Irvine's first Premier League game in charge at The Hawthorns and the young striker is set to lead the line once again.

Irvine revealed that his entire squad trained on Thursday, so Joleon Lescott and James Morrison could return after missing out against Sunderland due to knee injuries.

The former Everton assistant manager stated that Cristian Gamboa will not be in contention to make his debut as he continues to build up his fitness.