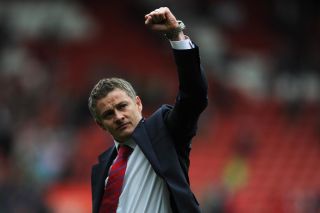 Sunderland currently prop up the Premier League table, but are just one point adrift of 18th-placed Cardiff ahead of the encounter at the Stadium of Light.

Three points for either side could see them move out of the relegation zone, provided Norwich City lose at Manchester United on Saturday, with just two weeks of action to follow.

Defeat would leave Cardiff in a perilous position, but Solskjaer is refusing to contemplate defeat and is purely focused on beating Gus Poyet's men and returning to south Wales with maximum points.

"We won't go into the game worrying about what everyone else thinks. We're going to go there and get the job done," he said.

"In a normal season one team would be adrift at the bottom but it's different this year, it's tight at the top and bottom.

"People talk about Sunderland being in good form but we're also shaping up well for this game."

The encounter may pit two sides struggling at the wrong end of the table against one another, but both head into the relegation six-pointer on the back of morale-boosting performances.

Cardiff earned a surprise 1-0 win at Southampton on April 12, before playing out a 1-1 draw at home to in-form Stoke City last weekend.

Poyet's men can top that though, having taken four points from visits to Manchester City and Chelsea in their past two fixtures.

If the reverse fixture at the Cardiff City Stadium is anything to go by, there should be shortage of entertainment.

Cardiff had led 2-0 thanks to goals from Jordon Mutch and Fraizer Campbell, only for Steven Fletcher to halve the arrears in the 83rd minute, before Jack Colback levelled the score at 2-2 deep into injury time.

Solskjaer has no fresh injury worries, with winger Craig Noone (abdominal) and centre-back Mark Hudson (hamstring) the only absentees.

Sunderland are hoping Wickham can  shake off a knock sustained against Chelsea, while Ki Sung-Yueng (knee) and Fletcher (ankle) will miss out, but full-back Phil Bardsley comes into contention after serving a suspension.