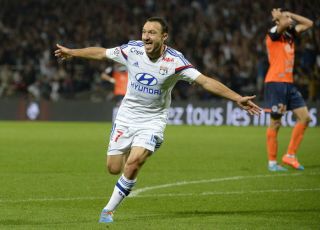 While Lyon would eventually win 5-1, Fournier claimed Montpellier were building some momentum when Siaka Tiene dragged a goal back for the visitors nine minutes into the second half.

Just seven minutes after Yoann Gourcuff had scored his second goal to make it 3-0 for Lyon, Tiene curled his free-kick past Anthony Lopes to give Montpellier some hope.

But the injection of Clinton N'Jie and Steed Malbranque inspired a second surge from Fournier's men with the former teeing up Alexandre Lacazette for Lyon's fourth in the 82nd minute.

"It was a great night, with an especially good first half," Fournier told Lyon's website after the game.

"We caused Montpellier problems, even if we had a little moment of difficulty in the second half. We dug deep and fought back.

"The substitutes made a difference and gave us our second wind. Scoring five goals in Ligue 1 doesn't happen every day, so congratulations to the players... now we have to back up against Marseille."

The win took Lyon to fourth in Ligue 1 ahead of arch-rivals Saint-Etienne on goal difference, while they trail second-placed Paris Saint-Germain and Bordeaux, who are third, by one point.