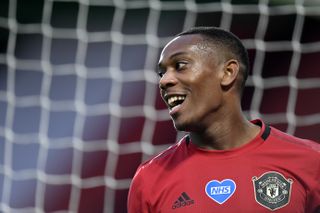 With Premier League football set to return after a shorter-than-normal hiatus, Fantasy Premier League managers will be taking end-of-season form into account far more than usual.

One man stood out at the end of the season as hitting his stride, and that man was Anthony Martial.

Classed as a midfielder last term but a forward this time around, Martial tops the strikers’ points charts for the post-lockdown period even at four points for a goal instead of five.

With an in-form Bruno Fernandes behind him, who’s to say Martial – who notched 200 FPL points last season – won’t continue to score?

Elsewhere, Danny Ings continued his excellent form for Southampton and continued to add goals to his tally after the Premier League’s resumption, scoring 58 FPL points thanks to seven goals in nine games.

And a four-goal haul for Michail Antonio against Norwich saw his FPL managers rewarded with a huge gameweek total and a post-lockdown score of 57 FPL points. At £6.5m, could the Hammer do something similar this year?

This decision means both players’ goals will be worth five points each instead of four, while they will also benefit from a point per clean sheet.

With points adjusted for position, both players make the post-lockdown top five for midfielders, but one player is streets ahead for this period.

Raheem Sterling scored nine league goals once the league got underway once more, scoring a whopping 86 FPL points for the Sterling faithful in that time.

Can Auba or Greenwood match the City star this season?

Wolves at the door

Two defenders led the way in the post-lockdown league and they both play for Wolves – Matt Doherty and Jonny.

The pair notched 50 and 49 FPL points respectively as Wolves finished seventh in the Premier League and missed out on European football due to Arsenal’s FA Cup win.

With Jonny injured, Doherty may well be a no-brainer for FPL managers looking to hit the ground running, his penchant for an assist only adding to his appeal.

A little further north and the league’s foremost full-backs Trent Alexander-Arnold and Andy Robertson continued to impress after the lengthy delay to the season.

Both men notched 44 FPL points as Liverpool strolled to their first Premier League crown – will they continue in the same vein while defending their title?