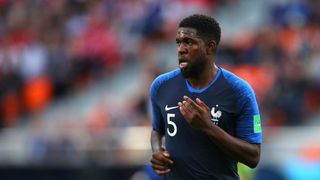 Samuel Umtiti has dismissed criticism of France's performances and insists the naysayers will change their tune if Les Bleus triumph in Russia.

Didier Deschamps' men have struggled to hit top gear in the World Cup so far, although they still managed to top Group C with seven points from three games. However, a turgid goalless draw with Denmark on Tuesday - a stalemate that ensured France finished first and Denmark qualified - attracted plenty of negative headlines.

Next up is a blockbuster clash with Argentina - and Umtiti's Barcelona club-mate Lionel Messi - in the last 16 on Saturday and the former Lyon man says only the result counts in Kazan.

"We're working to improve, to play a bit better, because we can do it," he said.

"But the most important thing will be to win, because if we go all the way, even if most people are not pleased by our football, everybody will be happy and we won't hear any more that the football was lacking."

Having spent most of his press conference on Thursday eulogising about Messi, Umtiti admitted knocking Argentina out would give him added satisfaction.

He added: "Only going through is important to me.

"If we knock out Brazil, Peru or Mexico, for me, I don't care. But it's true that playing such a great nation like Argentina...I would be proud to knock them out."

Argentina's qualification for the knockout phase was as dramatic as France's was routine. They were heading out when drawing 1-1 with Nigeria with four minutes to go of their final Group D game when the unlikely figure of Marcos Rojo emerged as the hero, scoring a fine volley to send Jorge Sampaoli's men through.

Despite the close call, midfielder Giovani Lo Celso said: "I would not call it a miracle but it was a very hard-fought qualification.

"Obviously it felt pretty agonising at times because of everything we had at stake, but we used all the tools we have as a team.

"We worked hard to get it and now we are much stronger to face France."

Lo Celso will encounter several familiar faces on Sunday as he plays his club football in France for Paris Saint-Germain.

Pogba will return to the starting XI after France's fringe players failed to impress in the horror show with Denmark. Argentina's midfield has looked ponderous so far and an in-form Pogba could wreak havoc.

Who else? Argentina's captain, inspiration and best player by a country mile. The Barcelona superstar has faced criticism for his performances in Russia but his opening goal against Nigeria showed class is permanent.

- France and Argentina will be facing each other for the 12th time. The South Americans hold the upper hand with six wins to two (D3), keeping a clean sheet in eight of their previous 11 encounters with the French.
- Argentina have gone past the first round for the 12th time in their last 13 World Cup appearances, the only exception coming in 2002. Their last four knockout games in the tournament have produced only three goals (2 goals for, 1 against).
- Penalty shoot-outs excluded, France have lost only one of their last 11 games in the knockout stages of the World Cup (W8 D2), that came against eventual winners Germany in July 2014 (0-1).
- France only conceded five shots on target in their three group games at World Cup 2018. The only goal they let in came from the penalty spot (Mile Jedinak for Australia).
- Argentina forward Lionel Messi has never scored in the knockout stages of the World Cup: 666 minutes, 0 goals. He is the last Argentinian player to score against France, back in February 2009 in a friendly (2-0).
- France’s Olivier Giroud has failed to score in his last 357 minutes at a major tournament, with his last goal dating back to the Euro 2016 quarter-final against Iceland. He’s yet to register a shot on target at this year’s World Cup, having spent 200 minutes on the pitch.
- Didier Deschamps will be taking charge of his 80th game as France manager, a new record as he overtakes Raymond Domenech.