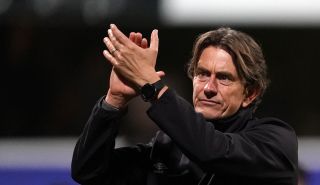 Goals from the BMW combination of Said Benrahma, Bryan Mbeumo and Ollie Watkins kept the pressure on the Championship’s top two, with Nahki Wells managing Rangers’ only response.

But it was a moment when his side lost the ball at a corner that caught the eye of the Dane.

He said: “I looked up and eight of our players were chasing back. That kind of defensive mindset is what we are all about this season.

“We blew them away in the first half. I’d said before the game that we play nice, attractive football but a big, big, big decisive factor that we needed to do well was the defensive side of the game.”

Frank was pleased with his side’s intensity and desire in a one-sided first half that he said saw them “defend low and high across the pitch, cut off the lines and score three great goals, two of them wonderful set-pieces”.

Brentford took the lead after 19 minutes, Benrahma smashing home Mathias Jensen’s free-kick from 12 yards after Ryan Manning hauled down Mbeumo by the byline.

And it was three just after the half hour when Jensen’s floated free-kick found Ethan Pinnock at the far post and he headed back across goal for Watkins to head home his 18th of the season at full stretch.

But the Bees boss was not happy with conceding the clean sheet when Wells touched home Manning’s low cross to give the visitors hope.

“Second half I thought we lacked a tiny bit of discipline but let’s not forget that QPR are a very good side and one of the highest scorers in the division,” he said.

“When they scored we got back to it again. Earlier in the season we might have had a few shaky minutes but that doesn’t happen any more.”

Frank can see no reason why any of the front three would want to leave Griffin Park.

He said: “In my head I can’t understand why anyone would want to leave us now.”

But he refused to even consider a place in the Premier League, insisting: “This was the last London derby at our old stadium but it is just another three points. This side is creating dreams for our supporters and I am pleased about that but we will continue to stay focused on only the next game.”

QPR boss Mark Warburton admitted turning the ‘hairdryer’ on his players at half-time.

He said: “We had a few heated words because my boys gave that one away in the first half. It’s the first time this season it’s happened, but it was not QPR. It was unacceptable.”

The former Brentford man added: “We started OK in a very strong wind but it was the same for both sides. We lost duels, didn’t do our jobs at set-pieces and could have been four down.”

Rangers rallied after the break as the Bees took their foot off the gas and Warburton said: “It was a much better second-half performance but then we missed a big chance on 71 minutes.

“After half-time a number of players stepped up and created chances but we have to be more clinical – today we lacked that aspect in the final third.”

He accused his players of “not doing their jobs” from set-pieces, but was pleased with the second half contribution from Cameron after he moved from centre back into midfield.

Warburton said: “We weren’t picking up the second ball in the first 45 but I thought he did well when he moved forward.”

Warburton conceded his side were blitzed by the better side before the break and added: “They are all good players at Brentford and they are not third by luck. They are third because they deserve to be there.

“There are no easy games in this division. They are all hard, but they’re even harder if you give yourself a mountain to climb like we did.”