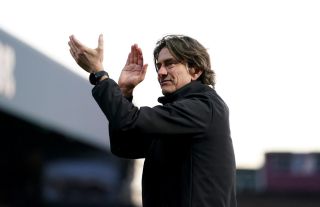 Brentford boss Thomas Frank believes his side’s coolness under pressure will be crucial in their bid to secure promotion.

Ollie Watkins struck three minutes from time to snatch a 3-2 victory in a pulsating clash against Middlesbrough at Griffin Park – their first home win over Boro since 1938.

Boro levelled through Lewis Wing and Ashley Fletcher after Julian Jeanvier and Bryan Mbeumo twice gave the hosts the lead.

But Watkins’ 20th goal of the campaign sealed the win and kept the Bees hot on the heels of the top two.

Frank identified his young side’s “coolness and discipline” as the thing that eventually clinched the three points.

“That is going to be more and more important as we move towards the end of the season,” said the Dane.

“Middlesbrough as a side are a lot better than their league position suggests. For the first 15 minutes we were in control but then the game got open and there was a lot of space but we didn’t use it to create enough.

“The biggest thing for me to take out of this game, apart from the three points, was the way we kept going, showed great character and calm and then scored the winner.”

Frank believes his side has developed well and learned throughout the season and is relishing their clash against fellow promotion-chasers Leeds at Griffin Park on Tuesday.

He added: “Individually and as a side and a squad we always learn from mistakes and that’s a big part of it. We have momentum at the moment but we want more.

“I am looking forward to the Leeds game because I think it’s going to be a fantastic game between two sides who both want to play football and press high aggressively.

“We are trying to create magical moments at Griffin Park. Today’s win against Middlesbrough was one but we’d like many more.”

“We had a lot of control for part of the game and that’s encouraging, but they are a very good side,” Woodgate said after only his side’s second defeat in nine league games.

“For much of the game we matched them, so I’m very disappointed not to get a point from it, but you can’t give good sides like Brentford a head start.”

Woodgate bemoaned his side’s defending from set pieces, adding: “You can’t defend like that, especially here. The second goal was a big deflection and I need to see the third again.

“If I have to take positives out of it they would be that we kept on playing and trying to do the right things and showed a lot of character to get back into the game when we went behind.”