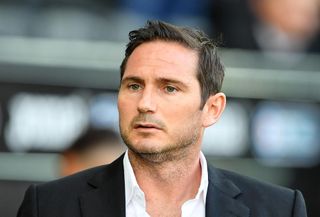 Frank Lampard warned against reading too much into Leeds’ recent form after Derby booked a play-off semi-final tie against Marcelo Bielsa’s out-of-sorts side.

The Rams’ 3-1 win over West Brom at Pride Park secured sixth place and a two-legged play-off against the Whites, who were beaten 3-2 by an Ipswich side who were already relegated and played the last 10 minutes with 10 men.

“The run-in has been good for us, so let’s go into it with no fear and try and upset a few people.

“I’ll plan to play the Leeds side that have been really strong all season. The cup atmosphere the play-offs bring can throw recent form out.

“I won’t plan that they’re in bad form, I’ll plan for Leeds who beat us well and looked at Christmas like they were going to win the league.”

Bielsa said of Leeds’ defeat at Portman Road, which saw Kemar Roofe blaze a penalty over the crossbar: “If you put aside the mistakes we made from this game, the performance from the team was good enough.”

Middlesbrough missed out on the top six as a result of Derby’s victory, and after a 2-1 win at Rotherham, manager Tony Pulis said: “We were hoping and praying to come out of this ground in the play-offs. That has been the overriding thing.​

“Steve (Gibson, the owner) has paid me to get a grip on the football club and I have tried to do that in a way that helps this club.​

“The job’s the job. I have been managing for 30-odd years. It’s not the first job I have been at where I have had to balance the books. I was doing that at Bournemouth in 93-94.”​

Norwich manager Daniel Farke admitted winning the Sky Bet Championship title was “the icing on the cake” following their 2-1 win at Aston Villa.

Goals from Teemu Pukki and Mario Vrancic secured victory at Villa Park, and Farke said: “To be able to lift the trophy at this amazing ground is a fantastic feeling.

“These moments don’t come that often and we will never forget this moment. To finish the season with 14 games unbeaten is outstanding. To win the title with 94 points and with almost 100 goals can make us very proud.

“We know that we are probably three or four years ahead of schedule to build something for this club but we will take it.”

Hull head coach Nigel Adkins does not know if he will be in charge next season, with his contract expiring next month.

Following the Tigers’ 1-1 draw against Bristol City, Adkins said: “I’m honoured to be the Hull City head coach. Earlier in the season we were bottom of the league and the fans weren’t chanting my name then. Through the ups and down we’ve all stuck together.

“It should get resolved soon, I’ve had a couple of good meetings. Whether I’m here or not it’s important you’ve still done the right things for the football club to try to progress.”