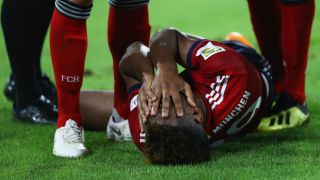 Bayern Munich winger Kingsley Coman has sustained a worrying injury to the same ankle that required surgery in February.

The France international was on the end of a crude late challenge from Hoffenheim defender Nico Schulz late in the first half of the Bundesliga season opener at Allianz Arena.

He was initially comforted by team-mates and had to be helped from the pitch by medical staff, having been unable to apply any pressure to his left foot.

The 22-year-old was forced to miss three months with last season's setback and was subsequently left out of France's World Cup squad.

Schulz was shown a yellow card for the tackle, one of four Hoffenheim players to be booked in the first half.