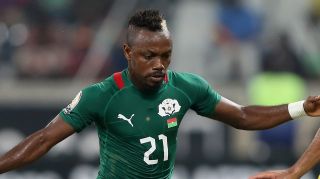 The African Cup of Nations runners-up had failed to even score in their previous four games against their continental rivals, slumping to defeat in each match, but they stopped the rot to stun the home side in a friendly in Tangier.

Chelsea youngster Bertrand Traore opened his senior account for Burkina Faso in the first half before Abdou Razack Traore doubled his side’s lead early in the second period.

Abdelaziz Barrada gave Morocco hope of a comeback when he lashed home following a goalmouth scramble after 64 minutes, but Burkina Faso were not to be denied a memorable victory.

The win continues a fine 2013 for Paul Put’s men, who are also in with a shot of reaching the play-off stages to earn a place at the 2014 FIFA World Cup.

Put will have been delighted by the manner in which his side started, as they were ahead after eight minutes, Bertrand Traore beating the Morocco goalkeeper Mohamed Amsif at his near post after the midfielder surged through a static defence.

Burkina Faso started the second half in a similar fashion as the first as they doubled their advantage after 50 minutes.

Charles Kabore’s right-wing cross eluded a clutch of defenders and Abdou Razack Traore slid in at the back post to squeeze the ball home from a narrow angle.

Morocco conjured a goal back just after the hour mark as Barrada side-footed a wayward cross-cum-shot into the net from six yards after a period of pressure caused panic in the Burkina Faso defence.

Put’s side, though, showed resolve to hold on for the win that will boost confidence ahead of their clash with South Africa, while Morocco are next in action against Ivory Coast in a World Cup qualifier in September.