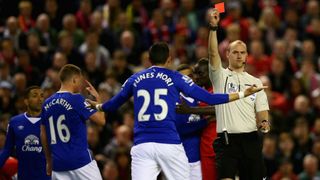 Everton defender Ramiro Funes Mori has apologised for his challenge on Divock Origi during Wednesday's Merseyside derby at Anfield.

The 25-year-old was sent off for a poor challenge on the Liverpool striker that forced him to be substituted over concerns he had broken an ankle.

Funes Mori prompted further criticism as he left the pitch for grabbing the badge on his shirt, with former Liverpool defender Jamie Carragher labelling his behaviour "embarrassing".

But the Argentina international has insisted he did not intend to hurt Origi and has offered an apology over the incident.

"I very much regret what happened yesterday. It was never my intention to harm a rival nor my colleagues leaving the field," he said in a statement posted on his official Twitter account.

"And regarding Divock Origi, I fervently hope it's nothing serious and know that was never my intention to hurt.

"I ask my apologies for what happened [sic]."

Manager Jurgen Klopp later revealed that Origi has not suffered a break, though he is set for further scans to ascertain the damage.

Liverpool went on to win 4-0 to inflict a fourth Premier League defeat in eight games on their city rivals.