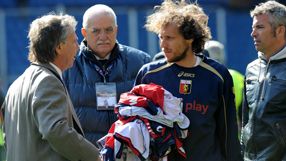 Relegation-threatened Genoa were losing 4-0 at home to modest Siena when the unprecedented incident happened early in the second half.

The referee stopped play as smoke bombs and firecrackers were hurled onto the pitch by a small contingent of hardcore Genoa "ultra" fans, some of whom then climbed over the perspex barriers separating them from the field.

The fans, some of them hooded, demanded the players remove their shirts after chanting they were not worthy of wearing them.

While Siena retired to their dressing room, most Genoa players handed their shirts to captain Marco Rossi although striker Giuseppe Sculli refused and began negotiating with the supporters.

"Those are not fans. Sculli did the right thing by not taking his shirt off. I hope these people are identified and condemned. They should not be allowed into the stadium ever again."

Genoa pulled a goal back after play resumed and the match ended 4-1.

Genoa, who had hoped to mount a challenge for the Europa League spots at least this term, are 17th in Serie A only one position and one point clear of Lecce in the relegation zone with five games left.

The club's leadership appeared to lose its way this season when Alberto Malesani was sacked in late December and replaced by Pasquale Marino, who was himself fired before Malesani was reappointed at the start of this month.

Italian football has shown both sides of its character this week with the game coming together following the death of Livorno's Piermario Morosini before more sordid match-fixing allegations and the Genoa farce sullied its image.