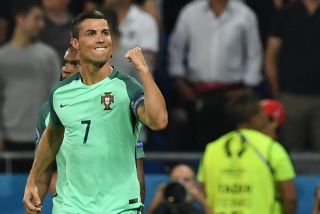 The Real Madrid forward has captained his side to a second major final, scoring three goals along the way.

And, while Futre concedes that Ronaldo has not been at his best in the tournament so far, he has been impressed by the star's maturity.

"We know Cristiano is not fine, he's at 50 per cent of his abilities, but Cristiano is still Cristiano," he told Cadena COPE.

"Cristiano is sacrificing himself, he's working a lot for the team; he's not angry.

"Against Croatia, he applauded [Ricardo] Quaresma's goal at the 117th minute. When he doesn't score he's usually angry, but not now. He works a lot, also defending."

Futre has also noted a difference between this tournament and the 2012 edition, with Ronaldo's contrasting penalty shootout contributions a clear indicator of his growth.

Four years ago, the 31-year-old was set to take Portugal's fifth penalty against Spain in the semi-finals, but never got the opportunity as his team crashed out.

In the quarter-finals of this competition, Ronaldo stepped up first against Poland to set Portugal on their way to the last four.

"You can see he's an authentic leader - for example, when he asked [Joao] Moutinho to take the [final] penalty," Futre continued.

"It was something normal, he [Moutinho] is an experienced player but he failed with his penalty four years ago against Spain during the semi-final.

"He has fought against his trauma. Cristiano acted as an authentic leader.

"Maybe Cristiano has a good day [in the final], he scores three goals and it's over."