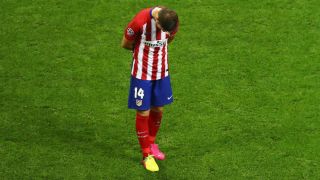 After seeing another Champions League final slip through their grasp, Atletico Madrid captain Gabi is convinced the three-time runners-up will bounce back to win Europe's premier club competition.

Atletico suffered heartbreak in Saturday's Champions League semi-final, losing 5-3 on penalties to city rivals Real Madrid after extra time could not break the 1-1 deadlock in Milan.

It was the second time in three seasons Atletico lost out to Madrid in the Champions League decider following the 4-1 defeat after extra time in Lisbon two years ago, but Gabi is adamant his side will eventually claim a maiden crown.

"We have to be proud of this team. Starting tomorrow, we have to keep working. This is what is nice and cruel about football," Gabi said.

"The important thing is to be there and I am convinced that this team is going to come back to win a Champions League because it deserves it."

After falling behind to Sergio Ramos' 15th-minute opener, Atletico worked their way into the contest.

Antoine Griezmann saw his 48th-minute penalty cannon off the crossbar before team-mate and substitute Yannick Carrasco equalised with 11 minutes remaining in regulation.

But Madrid came out on top in the shoot-out after Juanfran's spot-kick hit the post, paving the way for Cristiano Ronaldo to score the winning penalty at San Siro.

"I am proud of my team, of my fans, and I'm proud of being of Atletico de Madrid. I think that we have given our all and it's something that happens in football," Saul added.

"They have won the match with the luck of the penalties."