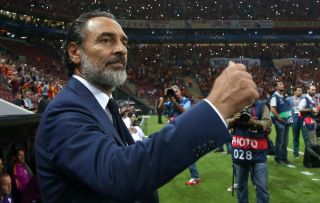 Besnik Hasi's Belgians produced a fine display and looked destined to steal the points when Dennis Praet netted in the 52nd minute of Tuesday's encounter.

Aleksandar Mitrovic should have made sure of the victory just a few moments after the opener but he somehow missed the target when one-on-one with Fernando Muslera, and Galatasaray made them pay.

Aurelien Chedjou did brilliantly down the left flank as he raced into the penalty area and cut a pass back to Burak Yilmaz, who smashed home the equaliser.

The result still leaves Galatasaray playing catch up on Group D rivals Borussia Dortmund - who beat Arsenal - but Prandelli accepted that it could have been much worse.

"It was a difficult game, but we believed until the end of the match," the Italian told reporters.

"We worked against a young team and we fought until the end. Their goal broke our spirits, but we didn't give up.

"After the match I congratulated my players one by one in the locker room, but we need to be more organised and faster.

"In this group there are strong teams, but we have a chance if we continue fighting."