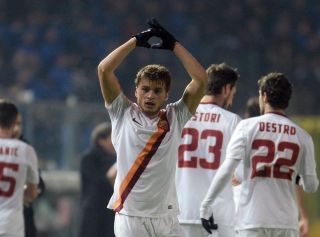 Garcia's side kept up the pressure on Juventus at the top of Serie A with their victory, although they had to come from behind to secure all three points in Bergamo.

Ljajic's fourth league goal of the season cancelled out Maximiliano Moralez's first-minute opener, and the Serbian then turned provided for Radja Nainggolan's winner.

"I've been saying Ljajic is a talented player for 18 months," said Garcia. "I'm lucky to be able to give all my forwards game time.

"Ljajic played really well tonight. He took his goal superbly then set up Nainggolan for the other."

Roma's spirit also pleased the head coach as they put pressure on Juve ahead of their clash with Lazio later on Saturday.

"We showed character today," he added. "The main thing was we got the win, even though we gave the ball away a lot.

"We did a lot of work on playing between the lines. Atalanta don't have a deep-lying midfielder so you can find space.

"This is a tough ground for everyone. We're not used to winning here in Bergamo so we're pleased today."