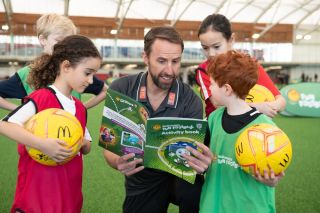 Gareth Southgate hopes the success of his youthful England side can energise the game at grassroots level.

Southgate has shown faith in a number of young players since becoming England manager, with Jadon Sancho, Callum Hudson-Odoi and Declan Rice among the latest to be given opportunities.

That outlook has helped England maintain the vibrancy that sustained last year’s run to the World Cup semi-finals with impressive showings in the Nations League and opening Euro 2020 qualifiers.

Southgate hopes the enthusiasm that emanates from his squad can trickle down throughout the game and not only bring people to the sport, but ensure they stick with it.

“Our players are very young so kids can connect with them easily,” Southgate told Press Association Sport. “The age group isn’t that far out of reach.

“We talk to the players about having fun, enjoying themselves. That shouldn’t change if you are a player with our first team or experiencing the game for the first time.

“The danger is they (young people) don’t enjoy the game as much when they get older because it becomes more serious. We have got to make sure they retain that element of fun right the way through their life.”

Southgate, fresh from England’s victories over the Czech Republic and Montenegro in the past week, was speaking at a launch event for McDonald’s Football Fun sessions at the Football Association’s St George’s Park base.

The scheme, which begins this spring, will see 600 sessions staged across the United Kingdom to enable children aged five to 11, regardless of gender or disability, to experience football for the first time.

Southgate, 48, feels such initiatives serve an important purpose because opportunities to come into contact with the game have changed in the years since he first became involved.

“We have to make sure the beauty of sessions like this is that there is a secure environment.

“Parents aren’t comfortable with their kids playing in the streets now, as we used to, so you might need slightly more organised sessions to fulfil those same objectives.”

Southgate dropped in on a training session for the coaches who will run the sessions on Thursday.

He said: “We do need investment in the game. We need facilities and we need coaches. Today is part of the investment in coaches which will allow kids to go and enjoy the game.”

:: McDonald’s Fun Football sessions aim to introduce thousands of children to football with over 600 sessions around the UK, starting this spring. Registration is now open. To find a session go to: www.mcdonalds.co.uk/funfootball