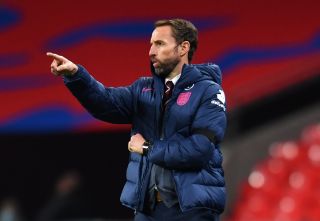 England manager Gareth Southgate is in tournament mode as he aims to follow up Nations League victory against Belgium with a Wembley win over Denmark.

The Three Lions moved to the top of Nations League Group A2 with a comeback win over the top-ranked team in the world on Sunday.

Romelu Lukaku put Belgium ahead from the penalty spot before Marcus Rashford levelled with a penalty of his own and the 2-1 win was secured courtesy of a deflected Mason Mount strike.

An excellent result for the #ThreeLions as they beat the number one ranked team in the world at @wembleystadium 🙌 pic.twitter.com/AazVOkEXz2— England (@England) October 11, 2020

While there were factors which made the victory something of a lucky one, Southgate said after the game that beating a team of the calibre of Belgium showed his young players what was possible in the future.

Rashford, too, said the players had proven to themselves that they could beat the best – having lost to Roberto Martinez’s side twice during the 2018 World Cup.

England reached the inaugural finals of the Nations League, finishing third after qualifying from a group which also contained Spain and Croatia.

Southgate heralded the competition for throwing up top-class fixtures on a regular basis but wants to see England take another step to next year’s finals with victory over Denmark on Wednesday.

“The quality of the opponent from the back players and their use of the ball, the angles, the movement and the one-twos, we are not going to face a more complicated game defensively, I think,” he said of Belgium.

“You will face different sorts of challenges; counter-attacks, speed, power – but they have got a bit of everything in their ranks and in Kevin De Bruyne they have such a special player.

“I just think for us it was a brilliant test, the sort of test we need. That is the beauty of the Nations League, you get a game against the highest-level opponent.

“Mentally and physically, that would have taken an enormous amount of out us and we are now in a situation, a bit like in a tournament, where we have to back that up on Wednesday and we have got to get that right.”

Only Kieran Trippier and Dominic Calvert-Lewin retained their places from the 3-0 win over their home nations rivals for the visit of Belgium.

With captain Harry Kane now closer to full fitness and Ben Chilwell passed fit following illness, the team is likely to change once more against the Danes, as Southgate heaped praise on his whole squad.

“Without the players playing like they did against Wales the other night, we wouldn’t have had our team fresh for Belgium,” he added.

“And if we hadn’t won the game against Wales there would have been a drama for three days.

“Although it is difficult to keep 29 players engaged and involved, without that squad and how they have been across the week we wouldn’t have got the result we did.”

Southgate hopes Kane will be “good to start on Wednesday” after a confidence-boosting stint off the bench.

The Three Lions boss was happy with the way the 3-4-3 formation worked, praising Harry Maguire for his promising return and Kyle Walker for an “excellent performance” at the right of a back three.

The Manchester City defender was presented with his 50th cap before the match and, despite his ongoing focus on promoting youth, Southgate believes such knowhow will be crucial moving forwards.

“The key was we needed our experienced players on the field,” the England manager said of the character displayed against Belgium.

“We’ve got multiple young players in the squad but we knew a game like tonight, you need those experienced players.

“Our togetherness that they’ve bonded over a long period of time because of the experiences they’ve had on and off the pitch, the closeness of their relationships, their understanding of what’s needed to win the biggest games.

“That doesn’t mean that they haven’t got a hell of a lot of work to do. We have.

“So we are not sitting saying there isn’t room to improve but they should get a feel of what might be possible as a group over the next few years because there is so much youth in the team, as well.”