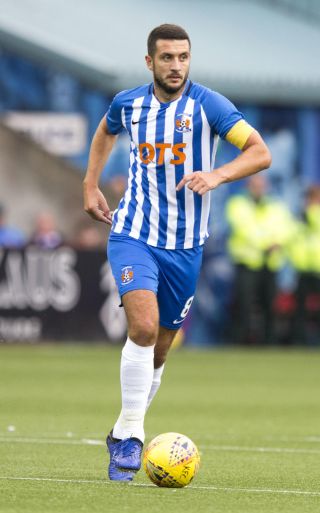 Kilmarnock moved up to third in the Ladbrokes Premiership after Gary Dicker’s header earned them a 1-0 win over St Mirren.

Angelo Alessio’s men were far from their best at a chilly Rugby Park but were saved for the second successive week by their captain.

The Ayrshire side move ahead of both Motherwell and Aberdeen who have Sunday fixtures against Rangers and Celtic respectively.​

St Mirren, who spurned a number of good chances, drop to 11th after their fifth successive away defeat.​

The visitors were the better side in a dull first half and may have felt unfortunate not to have gone in ahead. Danny Mullen had their best chance after latching onto a lofted Kirk Broadfoot ball but his shot was straight at Laurentiu Branescu.​

Sam Foley and Tony Andreu also had shots from distance while Killie stalwart Stuart Findlay was stretchered off after pulling up on the artificial surface.​

Kilmarnock started the second half with a little more purpose. Full-back Niko Hamalainen had their first shot in anger but it was straight down Vaclav Hladky’s throat.​

The visitors then forced Branescu into an altogether different kind of save. Again it was Mullen who ran in behind the Killie defence but this time he opted to go with his head, forcing the Romanian into a wonderful stop to touch the ball around the post.​

Tony Andreu was then presented with a golden opportunity after being freed by lone Saints forward Jon Obika. The former Dundee United man’s first touch was good but his shot was skewed well wide of the target in a massive let off for the hosts.​

Killie took full advantage of that spurned chance and went ahead a matter of minutes later. Rory McKenzie’s delivery from the corner was sublime and Dicker rose highest, unmarked, to nod the ball into the back of the net.​

The midfielder had not scored in the best part of three years prior to last week’s opener against Livingston but now has two in two for high-flying Killie.

The hosts avoided any major scares in the closing stages and held on for their sixth clean sheet in eight Premiership matches.