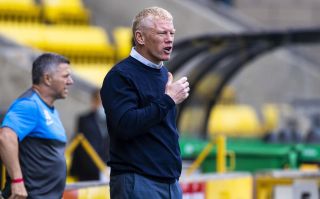 Gary Holt has urged Livingston to build on their first victory of the season when they host fellow Premiership strugglers Hamilton.

Holt was thrilled to see his players finally get a win in their last outing against Ross County a fortnight ago after a stuttering start to the new campaign.

The Lions manager was convinced performances had merited more and insists he was not concerned to have previously taken just two points from a possible 15.

However, Holt is hopeful his side will take belief from finally being rewarded with the three points following the narrow 1-0 success against County.

He said: “I wasn’t worried. I firmly believe if you keep doing the same things, in terms of performance and work-rate, you’ll get the results.

“But it was good for the boys. You want things for other people at times because you know it means so much to them.

“They could see what they were doing was the right thing, and I think that’s been drip fed to them over the first six games.

“I don’t think the level of performance has been too bad, but you need the ‘W’, you need to get a tick in that column to say you are off and running.

“Thankfully, we have got that to back up those performances – now we need to carry it on.”

Livingston’s victory over County lifted them off the foot of the Premiership table and above their next opponents.

Brian Rice’s Lanarkshire side have themselves only won once in their opening five games of the season but Holt is fully expecting a difficult encounter.

He added: “They’re a young, hungry side, they’ll be at it and in our faces, but they can play.

“That’s the thing with Hamilton, they can play football; they have a good blend of experience and youth.

“I think they have been unfortunate with results, similar to ourselves. It will be a tough game, we have always had tough games against them, usually entertaining ones, too. Hopefully it will be the same and we come out the right side of it.”