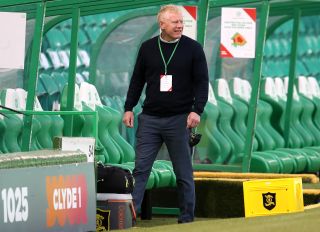 Gary Holt claimed Livingston’s performance in their late win over Dundee United at Tannadice was “synonymous” with the West Lothian club.

Nicky Clark curled in a 25-yard free-kick for the hosts in the 18th minute before United’s number two keeper Deniz Mehmet, making a rare appearance, made several good saves to keep a sturdy Livi side out.

However,  the Taysiders’ resistance was broken in the 53rd minute when defender Jon Guthrie clipped a shot in from eight yards and in the 90th minute the United defence found themselves outnumbered and Alan Forrest was able to tap in a pass from substitute Matej Poplatnik.

The win took Livingston above Dundee United and into sixth place in the Premiership and Holt said: “For 90 minutes I thought we dominated the game.

“I don’t think we were under any pressure, Robby McCrorie didn’t have a save to make.

“That performance was synonymous with who we are and that’s something that is really pleasing.

“We are good at scrapping, good at hunting in packs, we’re good at pressing people to make mistakes and have that never-say-die attitude.

“It would have been unjust not to come away with three points.

“But you have to fight, scrap and battle and I thought we had that in abundance and we still had the composure to score the winning goal.”

A disappointed United boss Micky Mellon said: “It is a sore one for us.

“It was a tough game, it was direct, a lot of free-kicks and corners and set plays, turned round continuously.

“I understand that you have to be better at finding the way that you want to play but sometimes you just have to get on with it, win your headers and knock-downs and keep battling and on the whole without creating a lot of chances, we did that.

“To lose a goal like that at the end is a sore one.

“The manner of the way we lost it is disappointing but all we can do is come back next week and keep trying to improve.”