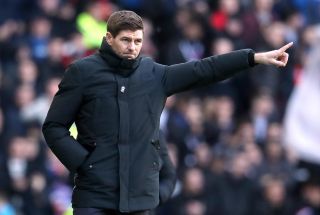 Steven Gerrard admits Rangers’ William Hill Scottish Cup exit has left him feeling low – but insists he is still determined to take his team back to the top.

The former Liverpool captain’s rookie season as Gers boss is destined to finish without a trophy after the Ibrox outfit were dumped out at the quarter-final stage by Aberdeen on Tuesday night.

The defeat – Gers’ third to the Dons in Glasgow since Gerrard made his move north – left the former England midfielder reeling as it brought his Ibrox honeymoon period to an end.

The Champions League winner knows his performance will be under scrutiny as never before when Rangers host Kilmarnock on Saturday, but the defiant boss believes he is still the man to bring the glory days back to Govan.

“It’s been tough since Aberdeen,” said Gerrard. “It’s been tough because not only have we gone out of a cup competition, which always hurts, but there was not many positives to take out of the game and Aberdeen deserved to qualify.

“So I’ve been a bit low and a bit flat. But I’m fine. I’ve picked myself back up and I’m ready for my next challenge.

“And I will guarantee you that I will improve myself personally and I’ll do everything I can to improve things (for the team). That’s all I can do.”

Gerrard cleared 23 players out of the Gers first-team squad when he took over, bringing in 14 summer signings before adding Jermain Defoe, Steven Davis, Glen Kamara and Matt Polster in January.

And he says there will be more changes to come this summer as he admitted transforming Rangers into a side capable of winning major honours is not a project that can be completed in the short term.

He said: “There will be change in the summer. There will be new players, there will be better players because the current players need support to keep growing and to give them a better chance of competing for what’s available.

“We will improve, of course we will, but I don’t expect the same in terms of numbers because I don’t think we need a squad overhaul.

“We need some bits of magic, some marquee players to add to what we’ve got if we’re to go to another level.”

But while his side have now been dumped out of both domestic cups by Aberdeen and trail Ladbrokes Premiership leaders Celtic by eight points, Gerrard is convinced the squad he presides over now is in better shape than the one he inherited from Graeme Murty.

He said: “Planning ahead never stops at Rangers. There had to be a lot of changes when I took over the job.

“I knew I wasn’t going to sort the problem out in one transfer window or even two.

“Without a doubt we’ve moved forward. We’ve improved. Players who were here before have raised their game.

“Players we’ve brought in, the majority have done really well. Some haven’t and we’re aware of that.

“We’ll continue to try to improve the starting XI and the match-day 18.

“What I can do is guarantee supporters that every bit of effort and energy from myself, (technical director) Mark Allen and the recruitment team is going in to make Rangers a better team, a winning team.

“My confidence hasn’t changed that I can make that happen – but it’s not going to happen overnight. Rome wasn’t built in a day.

“This job was huge when I walked in and it was huge for a reason. A lot of things needed fixed on and off the pitch and we’re doing everything we can to make that happen.”