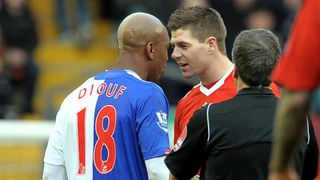 The 35-year-old ex-Senegal international, who also played for Blackburn Rovers, Bolton Wanderers and Sunderland in the Premier League, was criticised by both Anfield icons in their respective autobiographies.

Diouf had previously launched attacks against Gerrard and Carragher in response, but has now released a fresh barrage of criticism against the duo.

He said to So Foot: "Do you think Gerrard means it when he says that El-Hadji Diouf is not a very good player?

"I carried the national team for many years, 14 million fans on my shoulders. When we won, it was thanks to me, when we lost, it was my fault.

"What I represented for Senegal, he never managed 100th of that for England. He has never done anything in the World Cup or the Euros.

"When I arrived at Liverpool, seeing as I just did what I wanted, he thought that I did not respect the club, but he downright killed his team by slipping against Chelsea.

"If Liverpool has never won the Premier League, it is no accident. What goes around, comes around."

On Carragher, Diouf added: "The difference between Jamie and me is that I am a world-class player and he is a s***.

Diouf also described his time at Sunderland as "six s****y months" and labelled defender Anton Ferdinand as the "number one w*****" in the squad at that time.

The former Rangers forward now plans to branch out into politics in Senegal after retiring from football.

"In Saint-Louis, everyone is waiting for me, they want me to become mayor. With my background and knowledge, I will make one of the most beautiful cities in Africa.

"I am going to change things for my country. Football or politics: whatever I do, it is incredible."