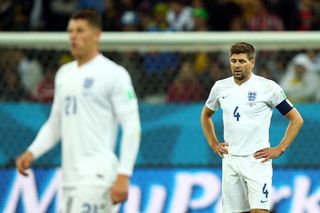 The 34-year-old Liverpool midfielder is in the twilight of his career and manager Roy Hodgson could opt for a younger captain as he revamps his squad ahead of England's UEFA Euro 2016 qualifying campaign.

But Beckham, who skippered England at the 2002 and 2006 World Cups, has thrown his support behind the Liverpool man.

"I think it would be great if Steven continues because it was a disappointing tournament for the whole team and the captain kind of takes the real kind of brunt of things," Beckham told Sky Sports News.

"But as a captain you feel a certain responsibility to lift the team. Stevie has done that for many years for Liverpool and for England. He has always been a real motivator, the way he plays and his passion that he shows on the pitch.

"I would love to see Stevie continue because I think these young players need someone to look up to and a mentor - someone that has been there and done it - and I think that Steve is a great captain. "He has been for Liverpool and England.

"He doesn't need my advice but one thing that I would say; that if you can play for England as long as you can, then do it."