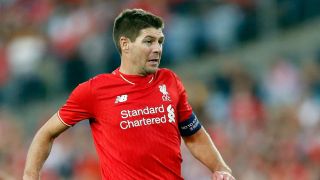 On Friday, it was confirmed that Gerrard had been appointed as a full-time academy coach, after a playing career at Anfield that spanned 17 years and included a memorable Champions League triumph in 2005.

Gerrard has made no secret of his desire to one day become a manager - with the top job at Liverpool seemingly inevitable at some stage.

And Klopp, who took over from Brendan Rodgers in October 2015, says he and the club will do everything in their power to help the career of the Anfield icon.

"We had a very good talk together. Everyone knows he is a wonderful guy," Klopp said in a media conference ahead of Wednesday's EFL Cup semi-final second leg at home to Southampton, where Liverpool will attempt to overturn a 1-0 deficit.

"For me it was important to know what Steven wants. He said he wants to be a manager in the future. That's cool.

"From my side we spoke about what I can do to help him. That’s cool.

"Being a manager is a job you have to learn. When a person like Steven Gerrard is ready to make the steps, that's wonderful news for Liverpool."