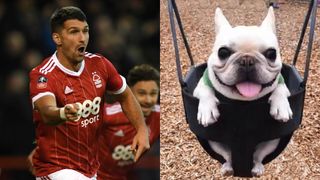 Scoring two goals in one of the biggest upsets of the FA Cup third round is seemingly not enough for Nottingham Forest hero Eric Lichaj.

The American scored Forest's first and second in a 4-2 win over holders Arsenal on Sunday, inflicting Arsene Wenger's earliest ever elimination from the competition.

Lichaj revealed after the match that he had been promised a dog by his wife if he scored a hat-trick.

But the defender believes his brace against Premier League opposition is more than worthy of the promised pooch.

Lichaj invited his followers to bombard partner Kathryn with dog pictures, memes and gifs using the hashtag #GetEricADog on Monday in a bid to change her stance.

she was acting tough on the radio sooo if anyone is bored on this Monday morning send dog pics, memes, gifs to January 8, 2018

And the 29-year-old's Forest colleagues were only too happy to oblige...