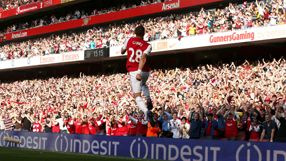 The Gunners currently sit third in the Premier League following their goalless draw with Chelsea last Saturday and are three points ahead of their closest contenders Newcastle United. However, Alan Pardew's side have a game in hand.

The 22-year-old left-back is aware that every game counts and there is everything left to play for.

"It has been tight all season. A lot of teams are competing and anything can happen," he told the club's official website.

"We have to finish the season strongly. The way we see it is that if we win our three games then we secure our position. We have three cup finals left to play.

"We shouldn't lose focus now. We have nine points to win, and we have a position to secure for next season. We must do that."

After a rocky start to the season that saw Arsene Wenger’s men win only one out of five games, including an embarrassing 8-2 defeat to Manchester United, the side has matured and have been in impressive form recently, picking up 28 points from an available 36.