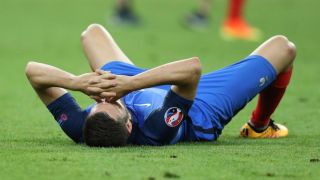 France striker Andre-Pierre Gignac reflected on the hosts nation's Euro 2016 dream turning into a nightmare as they slumped to a 1-0 extra-time defeat to Portugal in Sunday's final.

Portugal rode out the setback of losing captain and talisman Cristiano Ronaldo to a knee injury during the first half and substitute Eder struck a superb winner after 109 minutes.

Gignac replaced fellow forward Olivier Giroud in the 78th minute and turned in a lively cameo, where he agonisingly struck the inside of the post during stoppage time before the additional period.

"I think that we were the strongest for 90 minutes," the Tigres UANL player told reporters at the Stade de France.

"We've been unlucky. That's football. The truth is they were waiting for us with a false rhythm.

"They killed us during the extra time. It's awful. It's a nightmare. It's really terrible."

France played their semi-final against Germany on Thursday, 24 hours after Portugal beat Wales in Lyon but Gignac denied tiredness was a factor as Fernando Santos' team came on strongly during extra time.

"We were playing the final, there is no way to get tired," he explained. "What happened just happened, it's a twist of fate.

"We got some chances and touched the woodwork at the 92nd minute. The ball could have bounce back to Griezi [Antoine Griezmann] but it went wide."

Gignac believes the tournament as a whole boosted the national team's standing with the French public and urged his team-mates to respond to Sunday's crushing setback when the 2018 World Cup qualifying campaign begins with a trip to Belarus in September.

He added: "We must look at the bright side. I think we had a strong French national side that restored our image.

"We'll have to swallow [defeat]. It's going to be difficult to do so. We'll have s***ty holidays. We'll need to quickly bounce back because there are the World Cup qualifying games ahead of us."