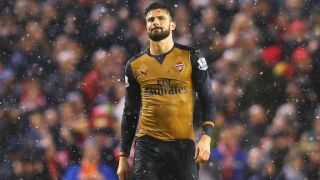 Two-goal hero Olivier Giroud could not hide his disappointment after Liverpool scored late to salvage a 3-3 draw as Arsenal missed the opportunity to move clear atop the Premier League.

Liverpool substitute Joe Allen scored a dramatic 90th-minute equaliser to ensure the points were shared at Anfield on Wednesday, as second-placed Leicester City beat Tottenham to move level on points with leaders Arsenal.

Arsenal were on track for a third consecutive league win when Giroud put the Londoners ahead approaching the hour-mark, after his first-half equaliser helped cancel out Roberto Firmino's quick-fire brace.

But it was not enough as Allen latched on to Christian Benteke's knockdown at the death.

"It's disappointing because we were 3-2 up at the end of the game," a clearly dejected Giroud told BT Sport post-match.

"It was a nice game for the fans because there was a lot of intensity and chances to score but when you concede three goals away from home it's hard to win.

"We should have been stronger till the end because we did well in the second half. My first feeling is disappointment but we have shown some character to comeback at 1-0 and 2-1 down."

Arsenal and Leicester are level on 43 points, but Giroud and Co. top the standings due to their superior goal difference after 21 rounds.