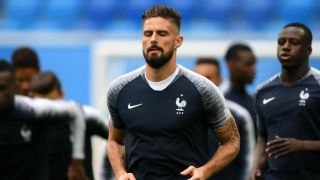 Olivier Giroud believes a focus on mentality is the reason why this France team is different to the one that lost the European Championships final to Portugal in 2016.

Giroud, 31, will lead the line again as France play Croatia in Sunday’s World Cup final, having replaced Ousmane Dembele since the second group game against Peru.

Les Bleus are favourites to lift the trophy after impressive knockout wins against Argentina, Uruguay and Belgium and Giroud says France will not let another opportunity for international silverware pass them by.

“It’s different. After the semi-final when we won against Germany we were a bit euphoric, whereas against Belgium it was different,” he said.

“It’s not the same feeling - we know we still have one game to win. There’s that real focus and concentration to finish the job - that’s why it’s different. We’ve come a long way to get here and we don’t want to waste this opportunity now.

“You can’t win a World Cup on just talent. Talent alone is not sufficient. You need efficiency. The mental strength is 70 per cent of the job. If you’re ready to work for your team-mates and each other with dedication and commitment then anything can happen.”

The Chelsea striker is yet to score in Russia, but knows his role is part of the bigger picture in creating team balance and fluency.

“Against Belgium I missed efficiency, luck and something to score but hopefully I can have it for the final,” he said.

“I feel like I give everything for the team and if one goal has to come then hopefully it will come and it will come on Sunday, but if we are a world champions and I don’t score, I’m okay with that."