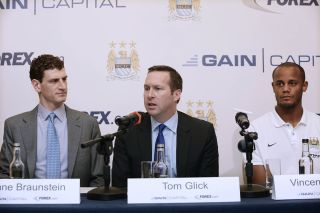 And Glick expects City's financial performance to go from strength to strength.

"Next year Manchester will have two of the top five clubs in terms of worldwide revenues, we’re catching up with Bayern Munich," Glick told the Manchester Evening News.

"We are very excited about the direction of the club."

Glick was quick to stress the importance of the club's relationship with fans who attend matches on a weekly basis.

He added: "We have to be affordable for our fans, that is why we have invested heavily in all aspects of the matchday experience, from the concourse to the new and unique Chairman’s Club.

"We are fortunate to have amazing owners who challenge us, and to have a visionary chief executive."

Glick added that pre-season tours around the globe had been part of the strategy and had generated unprecented interest in the club.

He said: "Over the summer we played nine games in four continents and we were astounded by the number of fans and interest in our club."

City have already announced plans to increase the capacity at the Etihad Stadium to 61,000 and the Premier League club are building a new training facility and youth academy nearby.