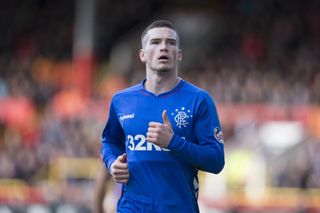 Rangers boss Steven Gerrard has told Ryan Kent to follow his heart as he weighs up his next move.

The Liverpool loan ace is due to return to Anfield in the summer but Gerrard is desperate to keep the winger at Ibrox.

The 22-year-old double PFA Scotland player and young player of the year nominee admitted earlier this week a second season in Glasgow remains a “possibility”.

But he also wants to start putting down solid routes, having found himself being bounced around the UK and Europe on the back of five loan spells in the last four years.

Gerrard knows the decision facing the former England youth international could be the biggest of his young career and his advice was simple: “Go where you will be happy.”

Responding to Kent’s “possibility” comment, the Ibrox boss said: “It’s not as reassuring as seeing his signature on a dotted line but it is a possibility, that’s where it’s at.

“Ryan knows we want him but we have to be respectful that the kid has a big decision to make. I’m sure there are clubs queuing up for him because he’s a top player.

“He has to think, ‘Where am I going to be happy playing football? Who do I want to share a dressing room with? Who’s going to help me enjoy my football?’

“Ryan has been accepted in this dressing room, the players love him.

“Now my advice is, ‘Go where you think you’ll be happy, improve and take your career to the next level. Go find your football happiness because that’s where you’ll find your best form’.

“We hope that will be Rangers but Ryan has to make the decision for himself and not really listen to what others are saying.”

Gerrard was speaking as he and midfielder Scott Arfield were named the Ladbrokes Premiership’s manager and player of the month for April.

Arfield’s stunning late form has seen him linked with a £3million move to Crystal Palace, but while Gerrard is determined to keep his top performers, he admits the final say may not rest on his desk.

Speaking at a pre-match press conference ahead of facing Hibernian on Sunday, he said: “I don’t want to lose Scott. He’s a player we’re trying to build round. We worked hard to get him in the door in the first place.

“But it works pretty simple, I tell you guys I don’t want him to go, tell him I love him live on air and I want him to stay. But every player has a price and some decisions get taken out of your hands and Scott’s hands.

“We’ll need to wait and see how it pans out.”

Two players who will be working under Gerrard next term are Jake Hastie and Steven Davis.

Motherwell youngster Hastie will move to Ibrox on a four-year deal this summer while Davis has made his Ibrox return from Southampton permanent by signing a 12-month contract.

“Obviously I’m very aware we want success now and as quick as we can. But it’s also important that we keep trying to strengthen this team for many years and Jake will certainly help us do that.

“He’s someone who’s got answers in the final third of the pitch and his return of seven goals in 14 appearances is a hell of a return for a player so young.

“Jake, like all the others in the squad, has got a six week opportunity over pre-season to impress and really fight for a shirt. We want competition and Jake is coming in to help us come up with more answers in the final third.

“He’s young and of course we’ll have to show patience with him.

“We always had an idea we were going to make Steven’s deal longer than six months. With playing regularly you can see he’s back in top form.

“With a full pre-season under his belt I’m sure he will be ready to help us challenge for major honours next year.”