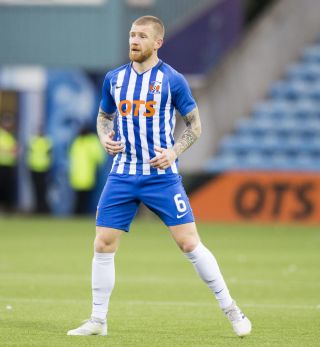 The 31-year-old Irishman has only scored once for Killie since he signed from Lincoln in 2017 and that was in a 2-1 win at St Mirren last season, with his normal work done in a holding midfield role alongside Gary Dicker.

Killie are sitting in fifth place in the Ladbrokes Premiership but have only scored eight times this season, including a brace in the 2-1 win over Livingston last week.

It is a statistic that irks their Italian boss and ahead of the visit of St Mirren on Saturday, Power conceded that he would like to get back on the scoresheet again but sees himself in a more supporting role.

He said: “That goal against St Mirren seems a long time ago now, and I think I’ll take any sort of goal at the minute and hopefully it comes this weekend but I would like to chip in.

“I think the manager is right. I don’t think we’ve ever been really free flowing.

“And it’s not just up to Eamonn Brophy or the front three to get the goals but I think you seen last weekend that Gary Dicker and Rory McKenzie chipped in so that’s an improvement in my eyes.

“So we’re working hard to do it.

“I think if the manager knows anything about me and Gary we are probably not going to be scoring five, six, seven goals a season.

“It would be lovely but I think our job is pretty much for the team and then hopefully the rest can do the business up top.”

He said: “I feel like I’ll be repeating myself from last year but to stay away from anywhere near the relegation zone, get away from that as soon as we can.

“I still think you have to be realistic, we are Kilmarnock, not one of the so-called top four, five or six maybe, but the togetherness of the group has seen us up and around there and hopefully it stays that way.”