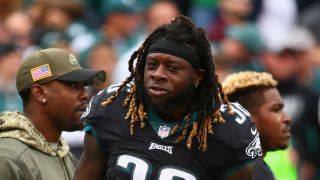 Alexis Sanchez's move from Arsenal to Manchester United has dominated the January transfer window, and one high-profile Gunners fan is delighted to see the back of the Chile international.

Jay Ajayi may have moved from London to the United States at the age of seven but the Philadelphia Eagles running back remains a staunch Arsenal supporter.

And while some fans may have been disappointed to see Sanchez depart Emirates Stadium for Old Trafford, Ajayi was pleased Arsene Wenger offloaded the 29-year-old.

"Basically, good riddance," Ajayi told The Telegraph. "I'm a supporter of the guys that play for the team and want to be there."

While Sanchez swapped north London for Manchester, Ajayi has been preparing for the biggest match of his career as the Eagles set their sights on the Super Bowl.

Minnesota will host the NFL's showpiece event on February 4 as the Eagles face the New England Patriots in a match that will bring America – and much of the world – to a standstill.

However, Ajayi says convincing his friends back in England to tune in has been a struggle.

"I tell them it's like playing in the Champions League final or the World Cup final," he added.

"It's the pinnacle of sport.

"There's no better game, there's nothing after the Super Bowl. This is it, it's one of the biggest sporting event in the world."