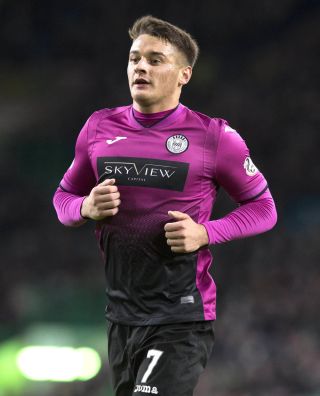 Jim Goodwin will make sure Kyle Magennis gets the best treatment after the St Mirren midfielder was ruled out for the rest of the season with a knee injury.

The 21-year-old was stretchered off after just seven minutes of the 1-0 defeat by Rangers at Ibrox on Wednesday night with a scan confirming a cruciate ligament problem which will require surgery.

Ahead of St Mirren’s Ladbrokes Premiership clash against Aberdeen in Paisley on Sunday, Buddies boss Goodwin said: “Kyle went for a scan yesterday and it was as feared.

“He has done his cruciate ligament so we are looking at a lengthy lay-off. His season will certainly be over and we will work hard during the rehab to make sure he is back for pre-season.

“It is a huge blow. I am obviously disappointed because I lose a good player from the team but I am more disappointed for him.

“I have been there myself as a player and it is the worst thing that can happen. It is important that we as a club support him as best we can.

“He will get the best rehab possible and we will make sure we get the best surgeon possible to do the operation and he is from a good family so he will get good support.

“He has been captain in a number of games this season in Stephen McGinn’s absence and I think that gives you the idea of the character of the boy that I am willing to make him captain at such a young age.

“He leads by example, a great attitude and technically a fantastic player. We have had interest in him prior to this so it is a blow to the boy more than anything else.”

Goodwin will look for a replacement before the transfer window closes at the end of January.

He said: “We will have to look to bring someone in. We have a week to do that.

“It wasn’t an area that we were looking at strengthening but with Kyle out of the equation we need to strengthen in that area and we will.

“Sunday’s approach will be completely different to the approach on Wednesday.

“Obviously we give Aberdeen a great amount of respect because they are a very good team.”