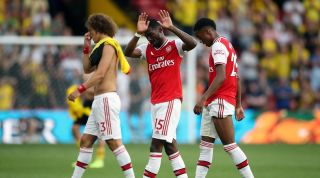 Graeme Souness has accused Arsenal of not being a "proper team" after their second-half performance against Watford.

The Gunners raced into a 2-0 lead in the opening period at Vicarage Road, only to concede twice after the break to draw 2-2.

Watford took 31 shots on Sunday afternoon, which is the most Arsenal have faced in a Premier League game since such data began being collected in 2003/04.

And Souness was unimpressed by the manner of their collapse against Quique Sanchez Flores's side, as well as Unai Emery's choice of substitutions.

"If you're an Arsenal supporter watching that, you must be scratching your head," the former Liverpool midfielder told Sky Sports.

"It was as if this is the first team in the first half, and we'll put the second team on in the second half. They capitulated.

"He brings on kids [Joe Willock and Reiss Nelson]. That was a game where, at 2-1, it was time to dig in and regroup and make sure you're not going to lose the game. And they should have lost the game in the second half, because when the kids came on they were all over the place.

"It was like a game of basketball, and I think if you're an Arsenal supporter that would deeply worry you."

Emery's side travel to Eintracht Frankfurt in the Europa League on Thursday, before hosting Aston Villa in the Premier League on Sunday.