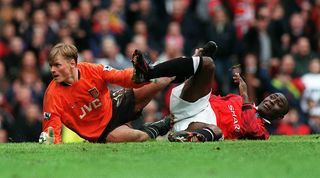 The less acclaimed Ferdinand brother was indeed a Premier League Player of the Month. In fact, he's won the same number as his older sibling Rio (one), meaning they’re the only brothers to claim the award.

In January 2006, Ferdinand’s dominant performances helped West Ham get two wins from three league games. The centre-back also opened the scoring in a 2-1 win over Fulham towards the end of the month – but it was a season that ended in heartbreak, as Ferdinand saw his decisive shootout penalty saved in the FA Cup final when West Ham were beaten by Liverpool.

Ferdinand left West Ham in 2008, played for various clubs in England and Turkey, and was most recently playing for St Mirren.

It’s not often that a player can pick up an individual award in the season his club are relegated, but step forward Bent. Despite being part of the Ipswich side that went down in 2001/02, the striker picked up his gong in January 2002.

He netted five goals in four games as Ipswich enjoyed a fantastic run at the turn of the year; one that looked like it could keep them up, following seven wins in eight matches. By the end of the month, Bent’s goals had helped to pull the Tractor Boys clear of relegation trouble – but they only won one game after February 2 and finished 18th.

The journeyman striker retired from football at the end of 2017/18 after playing for at Wick in the Southern Combination Premier League. Struggles in his personal life have led to run-ins with the law: Bent was declared bankrupt in January 2019, two-and-a-half years after being caught with cocaine at Chessington World of Adventures.

Arsenal's reserve goalkeeper picked up the prize in his first season at the club - and richly deserved it was, too. With David Seaman sidelined through injury, understudy Manninger came in and kept six straight clean sheets for a joint club record.

The last of these, before Seaman returned, came in a crucial 1-0 victory over Manchester United at Old Trafford – a win that proved pivotal as Arsenal won the league by one point over Alex Ferguson’s team. Manninger remained at Highbury until 2002 before leaving for Espanyol.

The Austrian rarely established himself as a first-choice goalkeeper throughout his career, but did make a surprise return to English football in 2016 when he trained with Liverpool before signing a short-term contract. He didn’t make an appearance for the Anfield club and retired in summer 2017, but still: fun while it lasted.

Le Fondre secured Reading’s first ever player-of-the-month award in January 2013 with five goals in four games for the Royals. The English striker didn’t score on New Year’s Day against Tottenham, but grabbed crucial late goals in each of the next three games. His 88th-minute equaliser against West Brom set up a spectacular finish as Reading won 3-2.

The following week, Le Fondre’s double secured all three points as Reading came from behind to beat Newcastle, and then he scored another pair at the end of the month to rescue a point against Chelsea (a 2-2 draw, with Le Fondre’s goals coming in the 87th and 94th minutes). The striker finished the season with the most substitute goals in a season (8) – a record that stands today.

He left Reading in 2014 and is now in Australia, aged 32, scoring at a healthy rate for Sydney FC.

Campbell’s fine April for Everton in 1998/99 was rewarded with his only player-of-the-month title. The striker spent six years at Goodison Park – but he won’t have had a better month than this one. Despite not scoring in the Toffees' defeats to Liverpool and Sheffield Wednesday at the beginning of the month, Campbell bagged braces in each of the Toffees’ next three game – including crucial goals in the 2-0 win over Coventry and a 3-1 victory at Newcastle. (Two games later, he scored a hat-trick as Everton demolished West Ham 6-0.)

Campbell retired from football in 2007 after brief spells at West Brom and Cardiff. He played over 200 games for Arsenal, but his scoring record was unremarkable and he's best remembered for his time at Everton, where he was the club’s top goalscorer in three consecutive seasons at the turn of the century.

The Brazilian midfielder, who made 127 appearances for Arsenal and is now their technical director, picked up the award in 2003/04 when the Gunners went unbeaten – although he did have to share the monthly honour with team-mate Dennis Bergkamp.

Edu bagged a crucial winner as Arsenal came from behind to beat Claudio Ranieri’s Chelsea 2-1, moving them seven points clear at the top of the table. At this point, he could have played for England and there was talk that he could go to Euro 2004 with the Three Lions – but Brazil didn’t like the sound of this, so selected him for the Copa America instead.

Perhaps it isn’t particularly unusual that a Brazil and Arsenal midfielder could claim a Premier League player-of-the-month award – but when you consider those who never won it (Patrick Vieira, for example), Edu does stand out. He left Arsenal in 2005 and retired in 2010 to become director of football at Corinthians.

One-cap Republic of Ireland international Evans scored three goals for Southampton as the Saints went unbeaten in April 1997, helping them stay in the top flight. Evans kick-started his month with a goal at Nottingham Forest, before striking against West Ham and Coventry to help the Saints pick up 11 crucial points. They eventually avoided relegation by just a point.

Evans only played 22 times for Southampton and scored four goals, but with three coming in one month it was a deserved award for the striker. He became something of a cult hero at The Dell, but only briefly: by October 1997 his stint was over as he joined West Brom, soon after his only international appearance for Ireland. He retired from football in 2006 after a long spell at Plymouth and a few games for Torquay.

On loan at Birmingham from Chelsea, Forssell enjoyed the most prolific season of his career in 2003/04 with 17 league goals. This was the fourth-highest total of anyone in the top tier that season and, amusingly, more than any Chelsea player managed in the first season of Roman Abramovich cash.

In March, the Finnish finisher picked up the PotM award after netting six goals in five games, including doubles against Middlesbrough and Leeds. He returned to Birmingham on loan again the following season, but didn’t score in his four appearances. His switch to St Andrew's was made permanent in 2005 anyway, though, and he netted 13 in 65 games spread across three years. He retired in 2017 after ending his career in Finland.

Three times! Odemwingie rocked up in England at West Brom in 2010, hit the ground running and did enough to nab the award in September 2010.

He became only the sixth player to win it twice in the same season after plundering five goals in six April 2011 games to help the Baggies survive relegation.

The Nigerian nabbed a third accolade in February 2012, despite playing in just two matches. The fact that he bagged five times – including a hat-trick against rivals Wolves – may have helped. Fast-forward a few years and he was driving to Loftus Road trying (and failing) to force through a deadline-day move to QPR.

Alan Pardew’s Newcastle won all four of their league games in November 2013, including massive victories over Chelsea and Tottenham where Krul kept clean sheets (and against Spurs, made a phenomenal 14 saves).

Newcastle went on to finish 10th that season, after which their Dutch goalkeeper suffered several injuries and spent time on loan at Ajax and AZ in his home league. He's now back in the Premier League with Norwich.

The Swedish striker was rewarded for a fine month in late 2010 – one in which his boss Owen Coyle picked up the manager’s prize, too. Bolton enjoyed three wins and two draws in November 2010, while Elmander netted three goals for the Trotters – including a double in their 5-1 win at home to Newcastle. Elmander’s goal against Wolves that November is memorable for his sublime piece of skill to turn away from three defenders before slotting into the bottom corner.

Bolton went on to finish 14th despite losing their final five matches.

Elmander had a spell at Galatasaray after leaving Lancashire in 2011, and spent the 2013/14 season on loan at Norwich. He was last spotted back in Sweden with Örgryte in 2017.

Needless to say, when a Sunderland player has won a Premier League player-of-the-month award in (relatively) recent years, it has come at the end of the season after they've pulled off a remarkable escape (see also: Steven Fletcher, April 2012).

April 2014 was no different as Sunderland picked up seven crucial points to retain their Premier League status. After defeats earlier in the month against Tottenham and Everton, Wickham inspired a 2-2 draw at Manchester City with both Sunderland goals. Three days later he scored again as Sunderland famously beat Chelsea at Stamford Bridge, before his double the following week helped see off Cardiff 4-0.

The Black Cats stayed up, finishing 14th. Wickham's form didn't last and he took in loan spells at Sheffield Wednesday and Leeds, before joining Crystal Palace in 2015.