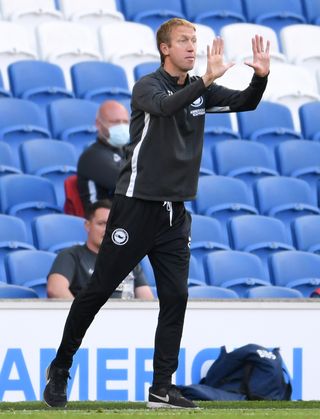 Graham Potter hopes Brighton’s youngsters can follow in the footsteps of David Beckham by launching successful careers in the League Cup.

Former England captain Beckham made his senior debut the last time Albion were drawn against Manchester United in the competition.

Then aged 17, he came on as a second-half substitute to replace Andrei Kanchelskis during a 1-1 draw at the Goldstone Ground in September 1992.

Seagulls boss Potter has used the cup to blood a number of academy graduates and is once again expected to field a much-changed side for Wednesday’s last-16 tie with Ole Gunnar Solskjaer’s side.

Asked if Beckham’s journey demonstrates how important the competition can be as a pathway for young talent, Potter replied: “Absolutely, yeah.

“He had a wonderful career, was a fantastic player, amazing servant for the game, great ambassador.

“And I’m sure our players and the Manchester United players that play – however young or old they are – will be looking to try to be positive in the game and to hope that it’s an experience they can use positively to either kick-start their career or start their career.”

Brighton, then in the third tier, lost the two-legged second-round tie 2-1 on aggregate following a 1-0 defeat at Old Trafford.

Beckham went on to have an illustrious and trophy-laden career with United, Real Madrid, LA Galaxy, AC Milan and Paris St Germain, while winning 115 caps for his country.

Albion have beaten Portsmouth 4-0 and Preston 2-0 en route to the fourth round this term.

Potter could come up against another youngster he helped develop, with his former Swansea player Daniel James in contention to feature for United.

After a promising start with United, James has lost his way a little bit as he competes for a starting spot alongside Marcus Rashford, Mason Greenwood and Anthony Martial, amid repeated speculation about a potential deal for Jadon Sancho.

The Wales winger has been linked with a move to the Amex Stadium and, while Potter would not be drawn on those rumours, he understands why the player’s progress has temporarily stalled.

“I think it’s the challenge of playing at a top club,” said Potter.

“You have got to put it in perspective – he’s at one of the best clubs in the world and he has to fight for his place. Dan James the kid I know is a fighter, he will give his best and I wish him well.”

Colombia winger Izquierdo has not played since April 2019 due to a serious knee injury but could soon be back in an Albion shirt.

“It is a little bit too early for Jose this game but he has been training with the group this week and we will try to get him some game time over the next days or week,” said Potter.