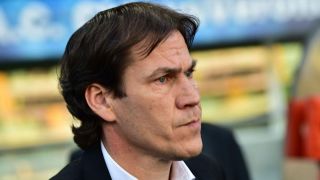 Sacked Roma coach Rudi Garcia has thanked the club's fans and staff, while rueing the fact his spell in charge came to what he felt was a premature end.

The 51-year-old led the team to consecutive second-place finishes in Serie A in his first two seasons at the helm, having previously guided Lille to a double of Ligue 1 and the Coupe de France in 2010-11.

But he was axed on Wednesday after a run of only one win in 10 matches, with Luciano Spalletti returning to the club to replace him on Thursday.

Garcia leaves Roma fifth in the table after 19 matches and with a daunting tie against Real Madrid in the Champions League round of 16 to come.

The Giallorossi are already out of the Coppa Italia, having lost at home to Serie B side Spezia last month.

Following his sacking, Garcia wrote on Twitter: "I would like to wish all the best to my players, staff and everyone who works at Roma.

"I go away with some great memories of the times we shared. From a personal and professional perspective, it was a great adventure, albeit one that ended too soon.

"All the best to every single Roma fan. Never forget: 'Don't question Roma, just love the club.' And I do love this club. FORZA ROMA FOREVER!"

Roma host bottom-of-the-table Verona in Spalletti's first match back in charge on Sunday.