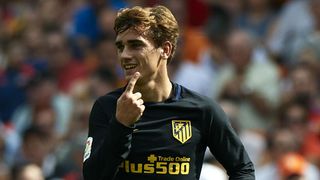 Griezmann, who claimed the Golden Boot at Euro 2016 as he fired France to the final, has registered six goals and three assists in nine appearances in a strong start to the season.

Carrasco, meanwhile, opened his account for the campaign with the winning goal in the Champions League victory over Bayern Munich on matchday two of the group phase, and notched a hat-trick and two assists as Atleti thrashed Granada 7-1 on Saturday.

Speaking ahead of their meeting with Rostov on Wednesday, Simeone praised his forward duo for becoming "men" during their time at the Vicente Calderon.

"Some of them came here as boys, matured personally and professionally here, and became men - like Griezmann or Carrasco," he said.

"The players that we signed have talent. Their best depends on them, and their physical and tactical progression."

Atletico top Group D after 1-0 victories over PSV and Bayern in their first two games, but Rostov boast a 26-game unbeaten run on home turf in all competitions.

Rostov vice-president and former interim boss, Kurban Berdyev, was coach of the Rubin Kazan side that shocked Atleti in a 2-0 win at the Calderon in the Europa League in 2013.

But Simeone has denied that memories of that defeat will have any impact on the match.

"We've seen various Rostov games. They are dangerous because they know exactly how their game works," he said.

"This Rostov is different to Rubin Kazan in 2013. Yes, they have the same coach, but the players and the teams are different."

Carrasco, meanwhile, expects Rostov to be fired up to spring a shock.

"It's a small pitch, with few gaps and a five-man defence. It will be difficult," the Belgium international said.

"It's been a while since they lost at home and I'm sure they will be eager to beat us and will be very motivated."