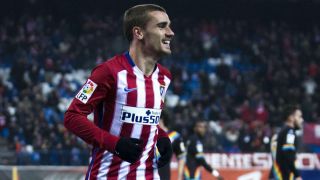 Griezmann has 18 goals in 29 appearances for Atletico this season, helping his team to sit level on points with Liga leaders Barcelona.

The France international's haul of 43 in 82 games at Atleti is only nine shy of his goal return at Real Sociedad, which was amassed over 202 appearances.

"Simeone has great rigour, discipline and intensity in workouts… it changed me completely," Griezmann said in an interview with RMC, during which he conceded there was a necessary adjustment period to the Argentinian's methods.

"For the first six months of the championship [in 2014-15], I struggled. I was making ends meet and in the match it was pretty complicated.

"I worked, I worked hard and I am now a major player for the club.

"I started this season really well and I hope to continue. I am full of confidence and more and more complete.

"I scored a lot of crucial goals, but also offensively and tactically I'm more complete."

Atletico, who has Celta Vigo in the Copa del Rey on Wednesday, travel to Barcelona for a potentially pivotal clash in the title race this weekend.

Griezmann is understandably wary of their opponents' formidable front trio of Luis Suarez, Lionel Messi and Neymar – acknowledging Atletico contained their threat for much of September's Liga clash at the Vicente Calderon only to be punished in a 2-1 loss.

"They can make the difference at any time," he said, reflecting on a match where Fernando Torres gave the hosts a 51st-minute lead.

"At the Calderon we do not see Neymar and then he puts in the goal to equalise at 1-1. We are then behind to Messi, who started on the bench.

"This is where we saw the need to be attentive for 90 minutes.

"I watched their match against  Malaga [a 2-1 win last Saturday] and they struggled, but they have Messi who can make the difference at any time."

Barcelona goalkeeper Claudio Bravo, who played alongside Griezmann at Sociedad, said this week his former team-mate would be a welcome addition at Camp Nou.

Despite Atletico being hit by a FIFA player registration ban this month, their star forward is not seeking a move elsewhere.

"When the coach told the press that I'm a very important player, it makes you want to stay," he added.

"Already, I was not looking anywhere else, but now ever less so."