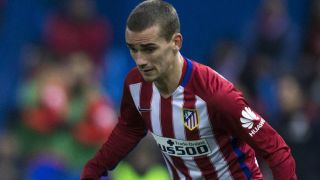 Atletico Madrid striker Antoine Griezmann has quashed speculation suggesting he will leave the Spanish capital for Chelsea at the end of the season.

The France international has been in fine form for Diego Simeone this term, scoring 19 goals in all competitions, and has been linked with a move to Stamford Bridge.

Atletico president Enrique Cerezo dismissed the prospect of Griezmann leaving recently, stating "no-one has spoken to us about a possible transfer".

And in a news conference on Wednesday, Griezmann stated both he and the club are on the same page in terms of his future.

"I want to continue here and I think the club's intention is not to sell, so I'm not going."

Griezmann moved to the Vicente Calderon in 2014 and is under contract until 2020.