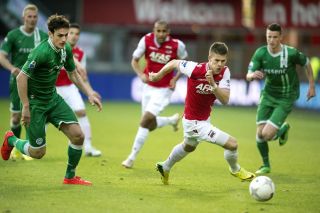 Erwin van de Looi saw his side complete the job on home turf after a goalless first leg as they denied Dick Advocaat a dream farewell at AZ.

Advocaat saw Groningen seize the early initiative in his final game in charge.

Tjaronn Chery and Hans Hateboer found the net in the first half, with the latter scoring again in the 61st minute as the hosts booked a place in the UEFA Europa League for the first time.

Their last outing on the continent came seven years ago when they were beaten on penalties in the first round of the UEFA Cup by Fiorentina.

Dordrecht finished the season in second and secured a place in the Eredivisie with an action-packed 3-1 win over Sparta Rotterdam on Sunday, which sealed a 5-3 aggregate success.

Funso Ojo, Paul Gladon and Giovanni Korte were on target for Dordrecht, who saw Jeffrey Fortes miss a second-half penalty, while Rotterdam finished with 10 men following the late dismissal of Steef Nieuwendaal.

Third-placed Excelsior made hard work of their play-off victory against RKC Waalwijk, despite adding two goals to their 2-0 first-leg lead within 26 minutes at Mandemakers Stadion.

Waalwijk drew level on the day before half-time, but could not continue their fightback as the visitors held firm.