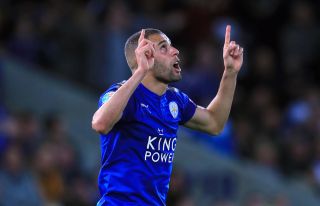 Algeria coach Djamel Belmadi has warned his side their group-stage heroics mean nothing as they prepare to enter the knockout phase of the Africa Cup of Nations.

Belmadi’s men have emerged as one of the tournament favourites after cruising through all three of their group games, scoring six goals without conceding any.

But Belmadi is aware that the rising expectations will mean nothing if they fail to get past Guinea in their last-16 clash in Cairo on Sunday.

Belmadi told a press conference: “The group stage is like a little tournament which we did well in.

“Each game is now a final. Morocco’s loss (on penalties to Benin) surprised me and we have to be prepared mentally so that we don’t follow.

“We didn’t exactly need a wake-up call. If we did lose, it’ll be because Guinea were the better team.”

Belmadi could afford to make changes for his side’s final group game against Tanzania and some of those players, including Adam Ounas and Islam Slimani, could feature again.

Guinea’s hopes of springing a major upset have been hit by the news that their star striker Naby Keita has been ruled out of the rest of the tournament with a thigh injury.