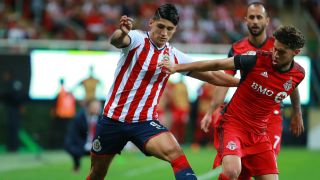 Guadalajara survived a penalty shoot-out against Toronto 4-2 to be crowned CONCACAF Champions League winners for the second time in their history, despite Wednesday's second-leg defeat.

With no extra time, the final went straight to penalties in Zapopan midweek after the decider finished 3-3 on aggregate following Toronto's 2-1 victory.

But Jonathan Osorio's spot-kick hit the bar, while Michael Bradley's effort sailed over the woodwork as Mexican side Guadalajara claimed North America's premier club competition for the first time since 1962.

The result continued Mexico's stranglehold on the competition, with the past 13 winners coming from the country.

Guadalajara came into the return leg with a 2-1 lead after upstaging MLS champions Toronto away from home last week.

And the Mexican hosts quickly extended their advantage in the 19th minute when Orbelin Pineda played his way behind Toronto's defence, latching on to a Rodolfo Pizarro pass, before rounding goalkeeper Alexander Bono.

But Toronto, who rested their star names for MLS action over the weekend, did not surrender as United States international Jozy Altidore struck back in his 100th appearance for the club.

Italian star Sebastian Giovinco then levelled the final on aggregate on the stroke of half-time, the former Juventus forward beating Rodolfo Cota at his near post.

Angel ZALDIVAR of scored the Goal of the Game against | April 26, 2018

Penalties were almost avoided just past the hour-mark after substitute Jose Godinez struck the post but Guadalajara were not to be denied in the shoot-out – Angel Zaldivar's effort proving to be the winner following Bradley's wayward attempt.