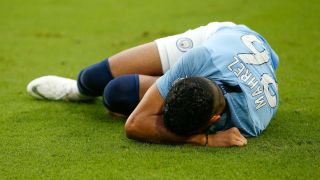 Pep Guardiola is waiting to discover the severity of Riyad Mahrez's ankle injury after the Manchester City attacker hobbled off against Bayern Munich.

Club-record signing Mahrez was substituted in the 28th minute due to ankle problem in City's 3-2 win over Bayern at the International Champions Cup on Saturday.

Mahrez, who arrived from Leicester City in a £60million deal, went down early under a challenge and the Algeria star failed to shake off the problem before the half-hour mark in Miami.

"I don't know [the extent]. I wasn't in the locker room," Guardiola told reporters. "It was his ankle. We will see, maybe it is not a problem.

"I'm concerned for many things, for injured players, players who are still not here but I am so satisfied for what all of the guys on the tour have done."

Bernardo Silva came off the bench to replace Mahrez and the Portugal international starred with a brace as Premier League champions City overturned a 2-0 deficit.

It was another fine performance from an undermanned and youthful City, who have been without a host of their stars following the World Cup in Russia.

Mahrez and Claudio Bravo once again headlined the starting XI, while star defender Aymeric Laporte made his first appearance of the pre-season, with Leroy Sane on the bench.

After capping their United States tour with victory having tasted back-to-back losses, Guardiola said: "We analysed our mistakes from the previous games and we played a lot better today. We started really well and had a lot of chances. We kept going and I am satisfied.

"We came here with a lot of young players and new players. So for them, it will be good for the future. It helps them to understand the game. I like to see my players fight for our teammates and play like a humble team

"You cannot imagine how much I have enjoyed these two weeks with these guys. The young guys have desire. They open their eyes and listen because they have their whole career ahead of them. I want to say thank you to them."