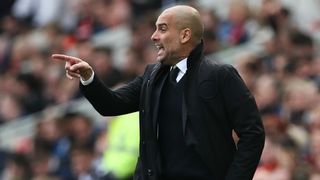 Manchester City boss Pep Guardiola believes he would have been sacked at Barcelona and Bayern Munich had he gone through a season without any silverware like in his first year at the Etihad Stadium.

Guardiola won an impressive 14 titles during his four-year spell in charge of Barcelona, before adding seven more pieces of silverware to his trophy cabinet at Bayern.

He will end his first season at City trophyless, though, and he is grateful the Premier League side are sticking by him regardless of their somewhat underwhelming results in 2016-17.

"I said many times I have this expectation because of what I have done in the past. I arrived at this club and I tried to do my best, some managers will have that pressure so I have to handle that, if not I go home," Guardiola said at a news conference.

"I came here to try to win this year, it was not possible. I will try with the club, with the players, with the staff, with the chairman, with the sporting director, to do it. And after that and the results are not [good], if we are judged just for the results we will be sacked and another one is coming here.

"I am not staying here because I am Pep or what I have done a long time ago, I know what the problem is. I am not going to be [wondering] all summer 'Oh what will happen next season if I do not win some titles'.

"Pressure I had when I arrived in Barcelona, when I had nothing to defend [myself with]. At that club if in six months you do not win you are really out, like Barcelona or Bayern Munich, there you have to win by far. If not, they do not give you a second chance.