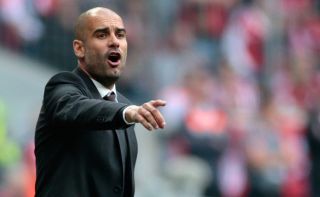 Toni Kroos and Arjen Robben were both forced off with groin problems in the first half of the game at the Allianz Arena, but their replacements - Mario Mandzukic and Mario Gotze - stepped up to score the goals that preserved Bayern's place at the top of the Bundesliga.

Competing in the UEFA Super Cup and Champions League has resulted in a glut of midweek fixtures for the Bavarians this season, and Guardiola admits his side's fitness has taken a hit as a result.

Bayern now have a full week to prepare for their clash with Hoffenheim next weekend, to the former Barcelona manager's relief.

"At the end that tires you out. But we have a week now to prepare and to refresh our ideas because today wasn't great.

"We had to make two changes because of injuries. Arjen and Toni played many, many games so that happens sometimes."

Gotze has contributed to five goals in his last three appearances, which have all come from the bench, and Guardiola is keen to put the Germany international in from the start after his recovery from an ankle injury.

He added: "Mario's positioning is more up front, close to the strikers. He has his qualities in one-on-ones and Mario Mandzukic is the best player in the world in the 18-yard box when it comes to headers.

"When we get the ball to him there he is very, very strong. He did his job well.

"But we always want to play our way ideally with Toni, Arjen and with Mandzukic and Mario Gotze. That would be fantastic."