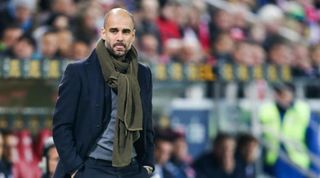 The Spanish coach is currently enjoying his second campaign in the Bundesliga, with leaders Bayern eight points clear at the top of the table and still in the DFB-Pokal and UEFA Champions League.

Reports in England have suggested that Manchester City are monitoring his availability should they opt to replace Manuel Pellegrini.

Guardiola, however, insists no contact has been made between the two clubs and that he fully intends to honour his contract with Bayern.

"I have one-and-a-half years left on my contract," he said. "We will sit together in the summer [to discuss a current extension]. Then we'll see.

"This is an outstanding club. I want to complete this contract.

"I have not had any offers [from Manchester City]. I am waiting for nothing."

Bayern can move a step closer to defending their DFB-Pokal triumph under Guardiola last season when they host Eintracht Braunschweig in the last 16 on Wednesday.