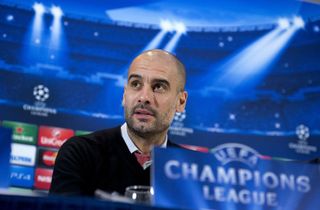 The two powerhouse clubs go head-to-head at Eastlands on Tuesday, with Bayern in no need of points having already secured top spot in Group E with maximum points from four matches.

City, conversely, have just two points in their European campaign, and desperately require a win over Guardiola's men to have their fate in their own hands heading to the final matchday.

Guardiola said he believes Manuel Pellegrini's dire predicament - compounded by suspensions to Yaya Toure and Fernandinho, an injury to David Silva and a fitness query on Sergio Aguero - will bandy City's squad together.

"To play football we need tension, we need something to fight for, you have to be a little bit afraid to play football, and from that point of view Manchester City has a bit of an advantage," the Spaniard said.

"The game tomorrow is more important for them than for us, but we must always find something to motivate us and be competitive.

"I think the best way to do that is our ides, how to play, tactics, we have to beat them tactically, with our movement and spirit and defend the name of our club.

"We can't be here for fun, we have to come here to play with our best performance to win three points which is very important for the club."

Guardiola's men have an imposing record of late, losing just once - the German Super Cup final to Borussia Dortmund - since their exit from last season's Champions League to eventual champions Real Madrid.

They have gone 18 competitive matches without defeat, including winning 11 of their past 12 - and conceding only six goals in their unbeaten run.

Midfielder Xabi Alonso hailed City's squad as one of the elite in the competition, despite their weakened status heading into Tuesday's clash.

"Obviously City are in a difficult position but they have shown during the last three years they have won the Premier League a couple of times," Alonso said.

"I'm pretty sure that this season they want to show their level and they want to go through that's why tomorrow is a key game for them.

"They have great players, of course tomorrow they will have important players suspended but as a whole team, it's one of the best squads in Europe for sure."